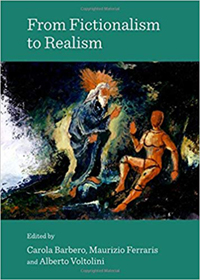 From Fictionalism to Realism

In ontology, realism and anti-realism may be taken as opposite attitudes towards entities of different kinds, so that one may turn out to be a realist with respect to certain entities and an anti-realist with respect to others. In this book, we focus this controversy for what concerns social entities in general and fictional entities in particular, these last being often considered nowadays as a kind of social entities. More specifically, fictionalists – those who hold that we only make-believe that there are entities of a certain kind – and creationists – those who maintain that entities of a certain kind are the products of human activity – will present themselves as the champions respectively of the anti-realist and the realist stance regarding the above entities. By evaluating the pros and cons of both these positions, this book is intended as spotting new light in a longstanding debate.

Introduction
From Fictionalism to Realism—Fictional and Other Social Entities
Carola Barbero, Maurizio Ferraris and Alberto Voltolini