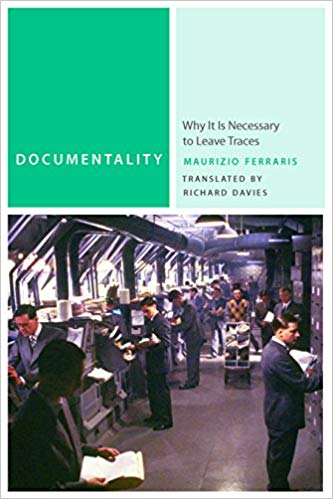 Documentality: Why It Is Necessary to Leave Traces

This books ushers in a new way of talking about social phenomena. It develops an ontology of social objects on the basis of the claim that registration or inscription—the leaving of a trace to be called up later—is what is most fundamental to them. In doing so, it systematically organizes concepts and theories that Ferraris’s predecessors—most notably Derrida, in his project of a positive grammatology—left in an impressionistic state.

Ferraris begins by redefining ontology as a way of cataloguing the world. Before any epistemology can discuss the validity of scientific or nonscientific judgments, one faces a collection of objects, be they natural, ideal, or social. Among these, Ferraris focuses on social objects, elaborating a theory of experience in the social world that leads him to define social objects as “inscribed acts.” He then uses this notion to interpret social phenomena, also in light of a systematic discussion of the concept of performatives, from Austin to Derrida and Searle.

Moving into considerations of the present technological revolution, Ferraris develops a “symptomatology of the document” that leads to a consideration of legal systems, finding in them original applications for his theory that an object equals a written act.

Written in an easy, often witty style, Documentality revises Foucault’s late concept of the “ontology of actuality” into the project of an “ontological laboratory,” thereby reinventing philosophy as a pragmatic activity that is directly applicable to our everyday life.

“The growth of modern civilization depends to a surprising degree on the power of documents. Law, commerce, science, government all depend on documents to transcend the constraints of pre-modern, face-to-face communication. Yet documents, thus far, have played only a tiny role in the work of social ontologists. Maurizio Ferraris shows in this brilliant new work how documents can be used as a springboard for an entirely new view of the structure of social reality — in which documents form the very tracks along which the engines of our mental and social lives run.”– —Barry Smith, Director of the National Center for Ontological Research (NCOR)

“Documentality re-energizes the traditional philosophical debate on realism by contextualizing this problematic within the field of new media and positioning it in the wake of the momentous philosophical contributions of Derrida and Foucault.”—Alessia Ricciardi, Northwestern University