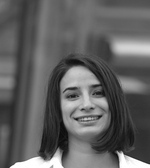 Angela Condello is Adjunct Professor (Jean Monnet Module “Human Rights Culture in the EU” 2017-2020) at the Department of Philosophy and Educational Sciences at the University of Torino, where she also coordinated the Jean Monnet Project “I work, therefore I am European” (http://labont.it/i-work-therefore-i-am-european).

She is Adjunct Professor of Law and Humanities at the Law School, University of Roma Tre.

Starting from September 1st 2019, she will be a member of the Interdeparment Center for Knowledge Interchange at the University of Torino, under the supervision of Prof. Gianmaria Ajani.

Angela has been an associate researcher in Maurizio Ferraris’ Documental mobilization initiative since January 2018.

She created and taught (205-2018) a course on law and gender at Roma Tre for which she got a teaching award. She worked as of 2013-2014 with the Human Rights Committee of the Italian Senate of the Republic. In 2015, she has been awarded with a Fernand Braudel Fellowship to conduct research on exemplarity between law and philosophy at the CENJ at the EHESS in Paris. In 2014, she was a Fellow at the Käte Hamburger Center for Advanced Study in the Humanities “Law as Culture”.

In 2015 and 2016 she was Guest Professor at the Law School of the University of Ghent. She organizes the International Roundtables for the Semiotics of Law (New York 2017, together with Prof. Goodrich at Cardozo Law School and Turin 2019, with LabOnt and Turin Law School) and is a member of the following editorial boards: Law Text Culture, Law and Literature, International Journal for the Semiotics of Law, Rivista di Estetica (for which she is editing an issue on law and the faculty of judgment), De Europa.

She has published widely on analogy and exemplarity in legal discourse, on law and literature and law and humanities with a special focus on new perspectives on law and language. Her writings have a appeared on: Politica del diritto, Mélanges de l’école française de Rome, Ratio Juris, Journal of Law and Society, Teoria e Critica della Regolazione Sociale, International Journal for Semiotics of Law, Semiotica.

She edited various collections and special issues, among which a special issue of Rivista di Estetica on law and the faculty of judgment (2017) and one for Law and Literature on the normativity of exemplarity. Her book Analogica. Il doppio legame tra diritto e analogia appeared in 2018 for Giappichelli. Her other book, Between Ordinary and Extraordinary. The Normativity of the Singular Case in Art and Law was also published in 2018, by Brill.

In January Angela edited, for Einaudi, Il denaro e i suoi inganni, by John Searle and Maurizio Ferraris, which contains an essay written by her on the ontology of money. In May 2019 the book “Money, Social Ontology and Law” (Condello, Ferraris, Searle) has been published by Routledge.

I Work Therefore I Am
Cultures of Normativity